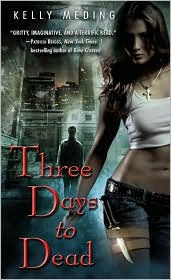 She's young, deadly, and hunted—with only three days to solve her own murder…

When Evangeline Stone wakes up naked and bruised on a cold slab at the morgue – in a stranger’s body, with no memory of who she is and how she got there – her troubles are only just beginning. Before that night, she and the other two members of her Triad were star bounty hunters -- mercilessly cleansing the city of the murderous creatures living in the shadows, from vampires to shape-shifters to trolls. Then something terrible happened that not only cost all three of them their lives, but also convinced the city’s other Hunters that Evy was a traitor . . . and she can’t even remember what it was.

Now she’s a fugitive, piecing together her memory, trying to deal some serious justice – and discovering that she has only three days to solve her own murder before the reincarnation spell wears off. Because in three days, Evy will die again – but this time, there’s no second chance…

One day, you're happily working as a Dreg Bounty Hunter killing supernatural rogues - trolls, vampires, goblins, etc - next thing you know you're waking up in someone else's body after being reborn again!

After waking up in a cold slab on a morgue, almost giving the technician a heart attack, Evy is ready for some answers - and fast! What's going on? Why is she back in some stranger's body and why? Who did this? But before she can hunt for some answers - er, she needs clothes.

And so begins the awesomeness. Evy needs help and after her whole Triad - a three-people group that hunt together - was murdered, there's only one person she's willing to trust: Wyatt, her Handler. He's her boss, the guy who gets the orders from the higher-ups to the Triad. But even though she certainly needs help, she's not sure who to trust.

Evy soon founds out that it was Wyatt who brought her back from the dead. He tells her that before she died - after being horrible tortured for two days - she knew a big secret about a possible alliance between the Bloods (what the vampires are called) and the Goblins. An alliance that would sign humanity's death contract and that has to be stopped at all costs. However, she can't remember a thing and they only have 72 hours to help her get her memories back, found out who's behind the murders of her Triad and if the rumor that the Bloods and Goblins are allying together is true, to do anything to stop them.

Three Days to Dead is the debut novel by Kelly Meding. It took me longer than normal to read this book. Not because I wasn't liking it but actually, the complete opposite. I wanted to savor each word. From beginning to end, I was completely absorbed in Evy's story. I believe that a book's beginning can make or break that book and Three Days to Dead's is one of the best I've read all year.

Everything, from the plot to the description and fabulous action scenes, is sharp and original. The story kept me on my feet, cursing when something got in the way of Evy and Wyatt's hunt for answers and laughing because both got a wicked sense of humor. Three Days to Dead is a gritty, action-packed, fabulous Urban Fantasy novel by an author that has become an absolutely auto-buy for me! Ms. Meding has outdone herself and I anxiously await for the next book, As Lie the Dead, out Spring/Summer 2010.

And I can't believe I have to wait that long!

P.S.: And did I mention - the cover? Absolutely rocks!

Hey Wendy!
OMG I am so glad you got a chance to review this book early also! Now we can talk about it. I knew you'd love it like I did! YAYYY! FABULOUS review. Man Kelly Meding rocks. I want another book by her so bad! I hardly ever reread but this one is going to be reread without a doubt. It's a definite keeper.

This sounds fantastic. I will definitely buy this one.

Rachael - thanks! I know, I'm so looking forward to her next one.

Great review. I'm off to check this out.