Nicholas risked his own life to save Petra, yet he knows he can never give in to the explosive attraction he feels for her. But the deep yearning they share tempts them. Together, they must find a way to lift the curse. For only a love this strong has the power to overcome such monstrous evil.

Petra has had it rough all her life. Being born with a curse that just from a touch can turn anybody into a mindless killer will do that to a girl. Because homegirl just can't catch a break now she's sentenced to die because of said curse. Well, damn! Until her lawyer steps in.. Or rather breaks her out of prison and really, more lawyers should be like him. But Nicholas didn't just sprung Petra out because he's an awesome lawyer, he actually has ulterior motives. A lawyer with ulterior motives? Unheard of! Nick needs help saving his friend and Petra is the only person who can help him.

Nick and Petra's close proximity quickly turns into something more. Their growing attraction can't be explored though because of Petra's crazy curse but it's more than that. Soon enough, they're on the run for their lives and before these two can try to find a way to explore their chemistry, they have to survive first.

So I have been following the Shadow Keepers ever since the first book came out and I have to say, I really wasn't that interested in Nick in the previous book. But boy, did that change! His character just comes alive in When Wicked Craves and right from the get-go, the reader can't help but be drawn to him. For a lawyer, he's incredibly honorable and caring, especially considering he just risked his whole existence by springing Petra out of jail in order to help his friend.

I felt bad for Petra at first. I mean, come on! Ever since she was born, she's got stuck with this horrifying curse that she literally cannot touch anybody! Could you imagine going through life not being able to hug a loved one or to kiss your significant other? That really sucks! But while yes, she definitely laments about this, she's also a very strong person. I would imagined her being a whiny little "oh woo is me" girl and while she's definitely got something to whine about, she doesn't do it a lot.
All-in-all, I really enjoyed reading When Wicked Craves! Nick and Petra have such good chemistry together and it was fun seeing them come together and help each other out. The Shadow Keepers series continues to be a blast to read! Lovable characters, great action, scary monsters and super hot scenes, what more could you ask for?
Lush Rating: 4!
Posted by Wendy at 4:02 PM No comments:

No space; too many books!

If you're like me, aka a broke college student living with her parents, then you're tight for space too. If you're REALLY like me (Lucky you..) then you got piles of books lying around in your room because you have no space to put them in! I'm kind of embarrassed to admit this but - 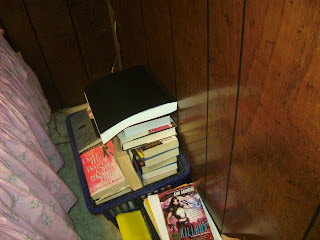 Oi!
Yup. Those are books in a shopping cart thingy right by my bed. I KNOW. I seriously have little space but looking at this stupid cart every single day was droving me craaaazy. So.
Cue nightstands! Doctor's orders. Stay tuned for my crazy adventure looking for the perfect nightstand. It might include several expletives on my part and a trip to the ER.
Posted by Wendy at 6:30 AM 7 comments:

The most reckless and fierce of the MacLeod brothers, Quinn is a prisoner of the god inside him, tormented by his inability to save his family from slaughter. His fury governs him, and day by day he loses himself to the darkness in his soul. But Quinn has a profound yearning for a woman’s love….

Raised by Druids, the achingly beautiful Marcail is as spellbinding as the ancient magic that surges through her body. To Quinn, she is most desirable woman he has ever known. But to his enemy Deirdre, she is the perfect bait to lure Quinn into her trap. Once the two lovers are in her wicked grasp, their passion will be put to the ultimate test…

Ever since I read the first book in this series (Dangerous Highlander) I had been dying to read more about Quinn so needless to say, I was beyond excited to finally get my hands on this book! After having been tormented for centuries by the god inside of him, Quinn is pretty much about to snap which I expected but I never thought I would enjoy his snapping so much!

He has now been imprisoned by his numero uno enemy: Deidre the evil Druid who has been after the MacLeod brothers for a long time. And Quinn will do anything to kill her slowly and painfully. Marcail's in a bit of a bind. She's a Druid who was just captured but Deidre but she's also much more than that. In her mind, there's a spell but could put an end to this whole war.. If only she knew how to access it!

Marcail and Quinn meet under not the best of circumstances - Both imprisoned in a pit surrounded by enemy just waiting for a moment of weakness to get them. To make matter worse (Or in my opinion, even better!) from the get-go, Quinn and Marcail have the hots for each other but it's kinda hard to explore said chemistry where they both know they could both be killed any minute now. Not that this should stop them from trying but I'm just sayin'.

Wicked Highlander is with no doubt the best installment to date in this series! From beginning to end, I was enthralled in this story. Quinn breaks my heart, he has been through so much and somehow has manage to come slightly - oh, who am I kidding, more like I was surprised he hasn't gone crazy and killed everybody by now - damaged and even more stronger from having to deal with all that heartache. The relationship between him and Marcail was just unbelievable! I could feel the passion and chemistry just coming off the page! I totally loved those characters and every single secondary character too. I had a blast reading Wicked Highlander! The characters are to die for, the steamy and action-packed scenes a joy to read and I cannot wait to read more of this wonderful series.

Review! Enemy Within by Marcella Burnard

An intergalactic cold war-and some heated passion- from an inventive new voice in futuristic romance.

After a stint in an alien prison, Captain Ari Rose wonders why she even bothered to survive. Stripped of her command and banished to her father's scientific expedition to finish a Ph.D. she doesn't want, Ari never planned to languish quietly behind a desk. She wasn't built for it, either. But when pirates commandeer her father's ship, Ari once again becomes a prisoner.

As far as pirate leader Cullin is concerned, Ari's past imprisonment puts her dead center in Cullin's sights. If she hasn't been brainwashed and returned as a spy, then he's convinced she must be part of a traitorous alliance endangering billions of lives. Cullin can't afford the desire she fires within him and he'll stop at nothing, including destroying her, to uncover the truth.

Captain Alexandra Rose - or Ari - has had it rough lately. After being held prisoner in an alien prison for three torturous months, she was thought a spy and dismissed by her own government. Now she's working with her father on his scientific expedition and this is definitely not Ari's idea of a good time. At all. Especially when pirates hijack her father's ship, things to go to hell quick in a hand basket.
Cullin Seaghdh is the pirate leader or so it seems. His main focus is Ari and what happened in her imprisonment because he thinks either she's a spy or she's part of a horrifying alliance made to destroy millions of beings. Either way, he's not about to let her out of his sights. No matter how their close proximity might ignite a hot chemistry that might burn them both.
Enemy Within is Burnard's debut novel and a huge hit! If you like futuristic romances in which the heroine is majorly kickass and yet so vulnerable at the same time, you'll love this story! I know I did. Neither Ari or Cullin pull their punches and it was highly entertaining seeing them interact and slowly but surely develop a super steamy relationship. Ari killed me at times, I was tearing up! She has been through hell and while yes, she's insanely damaged now, she's so determined to live and there were a few times when her vulnerability just broke my heart. But Cullin was fabulous, he was there with her all the way and I loved him too!
The one complaint I have is that the terminology confused the bejesus out of me. However, I complain about this in pretty much every futuristic romance I read. I'm not that tech-savy and admittedly all the made-up terms just annoyed me at times. Apart from that, I highly enjoyed Enemy Within. The characters are absolutely wonderful, Ari and Cullin will dig their little place in your heart and you'll be cheering for them in no time, the action-packed plot is super fun to read and I'm definitely going to be reading more of Burnard's stories in the future!
Lush Rating: 4!
Posted by Wendy at 2:59 PM 3 comments: