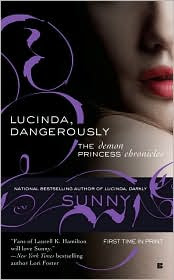 Intimately bonded to both a Monére warrior and a black creature from Hell, demon princess Lucinda has gained powers no demon dead has ever possessed. Now returned to the world of the living with her two bondmates, her lover, Stefan, and his ward, Jonnie, she hopes to carve out a new life for herself and her small mixed family.

But soon after returning to her territory, Lucinda is kidnapped and imprisoned by her demon enemy, Derek. He takes her to a hidden outland in Hell, a bleak and desolate landscape riddled with disfigured rejects. At first enraged by Lucinda’s new abilities, Derek soon realizes that he may have stumbled upon a way to regain his power—and Lucinda’s new life is the sacrifice...

Lucinda is a Demon Princess who's gained massive powers that no one has ever heard of before. Because of that, she's made new enemies but she's also made new life-long relationships. She has recently bonded to a Monére warrior and a creature from hell called flowers of darkness. They are literally all black and can travel through plants' roots and heal a person. Along with her lover, Stefan, his ward, Jonnie, and two bodyguards sent by her father, their little group just wants to make a new life together.

Unfortunately, soon after she's returned from hell, Lucinda is kidnapped and imprisoned by her biggest enemy, Derek, who's also a demon. He takes her to the outskirts of hell where only beings called the Bandits exist in the place. They are disfigured rejects living in a bleak and empty landscape with no salvation in sight. Derek's one goal is to regain his powers and he's willing to do anything - even sacrifice Lucinda to a horrible fate - to get them back.

Lucinda, Dangerously is the second book in the Demon Princess Series, following Lucinda, Darkly. Lucinda never thought she would end up with two bondmates, and a lover and now that she has them, she's determined to do anything to make sure they're safe and well cared for. However, she's never cared for someone else before and it's taking her a bit to get used to it. Even though the story is in mostly Lucinda's point of view, each character is nicely developed and it doesn't feel like it's just about her.

I felt that the story between Ruric, one of her bodyguards, and Mary, who's a blind human girl, sort of stole the story. I completely was fascinated with what was going on with them and I really wish their part had been longer. Not to say that Lucinda's own plot line wasn't great to read. It kept me on the edge of my seat wanting to know what was going to happen next. Hari, her other bodyguard, is an awesome character. At first, he seems like a thoughtless bastard but as I continue reading, unexpected sides of him are shown and he soon became one of my favorite characters.

Lucinda, Dangerously is a great story with a kick-ass heroine. The writing is lovely, the characters are endearing and sexy and the plot fleshed out and wonderful. I absolutely enjoyed myself reading this story and I eagerly await the next installment in this series.

[original review posted on NOR]

All your books this week look great! Hope you enjoy reading them all :)