"Waiting On" Wednesday is a weekly event, at Breaking the Spine, that spotlights upcoming releases that we're eagerly anticipating. 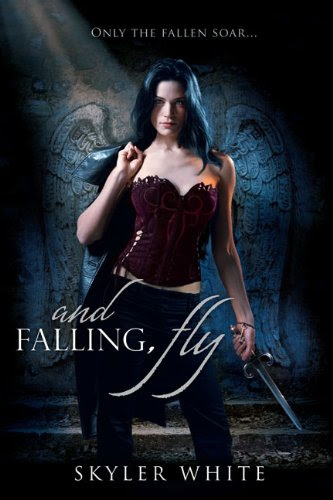 In a dark and seedy underground of burned-out rock stars and angels- turned-vampires, a revolutionary neuroscientist and a fallen angel must pit medicine against mythology in an attempt to erase their tortured pasts...but at what cost?

Olivia, vampire and fallen angel of desire, is hopeless...and damned. Since the fall from Eden, she has hungered for love, but fed only on desire. Dominic O'Shaughnessy is a neuroscientist plagued by impossible visions. When his research and her despair collide at L'OtelMathillide- a subterranean hell of beauty, demons, and dreams-rationalist and angel unite in a clash of desire and damnation that threatens to destroy them both.
And cue swooning! I. Must. Have. And Falling, Fly comes out March 2010 from Berkley Trade. I don't think I can wait that long.

That sounds really interesting... I haven't read any Paranormal Adult books in quite some time - I'll have to check this one out. I do like fallen angels! :)

Oh wow, what a title. Amazing title. I am really stuck on that title, it's wow.

I don't even care about the cover (which is very cool), I'm loving just the title.

Great title and Blurb and the cover is so gorgeous!

That cover is gorgeous! I'll keep an eye open for reviews of this book when it comes out, it does look interesting =)

Oooh, this sounds VERY good! I can't wait either:)

Wow, do I really need to say more. What a lovley cover and I just love the summary. Everything that has to do with vampires is just great.

Fallen angels are the in thing! I'm loving the angel fiction.

Oh my - this sounds good. A fallen angel and a scientist - wow.

I would definitely give this a try. Trying to expand my reading horizons and this sounds like a good one.